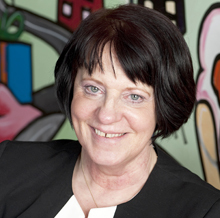 Last week I wrote the first part of a review of the Cerebra annual conference, held in London in October 2014. By far the best speaker at the event was Dr Maggie Atkinson, the Children’s Commissioner for England. The role of the Children’s Commissioner is to promote and protect the rights of children in England, and Dr Atkinson spoke passionately about how she fully involves young people in the process. In a society where young people are so often demonised by the media, it was refreshing to hear someone speaking so positively about them. Dr Atkinson gives children and young people a voice and seems to work hard to ensure they have a say in the matters that affect them.

Much of Dr Atkinson’s highly engaging presentation was about the United Nations Convention on the Rights of the Child, a legal treaty that the United Kingdom signed up to in 1990. The policies in the treaty came into law in the UK in 192, but when it comes to children with disabilities and complex needs, it seems we are a long way from fulfilling our commitments to the treaty.

There are many articles in the treaty, but the overall message is that:

All too often it feels like children with disabilities are brushed aside, given off-the-shelf support or worse, not given any support at all. Yet in law, every child, including those with any disability, should be given the support, care, education and resources to  reach their full potential, whatever that may be.

Too many times my son has only been offered the support he needs when things have hit crisis point. OK so they support was there when he really needed it – but wouldn’t it have been better if he’d been supported to succeed, to reach his potential – rather than being left to fail, with support offered as a last resort?

Dr Atkinson talked a little about the new Education, Health and Care Plans and spoke positively about how, unlike the old Statements of Educational Needs, the ECH Plans have the potential to put the child at the heart of the plan, and to put the child and their family in the driving seat when it comes to getting the right support.

As the plans start to be implemented around the UK, only time will tell if children with extra needs will be given more, and more relevant, support …. we can only hope.